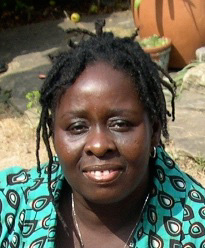 The title Pantheon for me situates the work in a couple of ways. Firstly it sites the work toward the ceiling in the Du Bois Centre — skywards and heavenwards. The viewer is compelled to look up to engage with the work. Secondly, the term “Pantheon” unites Du Bois and his fellow Pan-Africanists and modern thinkers in a firmament of significant figures and events. The Pantheon in ancient Rome was a collection of the ancient gods. I am not suggest- ing that Du Bois and his peers and the more contemporary figures are gods, but I do want to commemorate their achievements through this piece of work. Pantheon is comprised of two elements. Firstly the portraits collaged onto painted paper plates hung above the doors and below the ceiling in the corridor of the Du Bois Centre. Secondly a decorative border of black pictographic images is printed on brown paper. This border “frames” the plates by being placed in two strips along the tops of the doors and under the ceiling. My first impression of the Du Bois Centre in 2005 was the realization that it was Du Bois’s home for the last couple of years of his life. The first objects that struck me were the photographs of Du Bois with his wife and the Nkrumahs in the first space of the house. I decided to use the plates as a site for the photographs, to tap into what I felt was the “domestic” ambience of the Du Bois Centre. I have read about Du Bois the Pan-Africanist and civil rights leader, but initially really wanted to tap into Du Bois the family man, husband, friend, and father. The contrast between the plates with their sepia-toned portraits and the graphic printed wallpaper border will be intriguing I think, and I hope will look as though it belongs in the domestic setting of the space. Du Bois was a Victorian gentleman, and the plates look as though they belong in a Victorian parlor. Even the very idea of a wallpaper border as a decorative device is Victorian in origin. The pictographic symbols printed onto the border will be in stark contrast to the plates depicting the pantheon of Pan-Africanists. The Pan- Africanists were learned, educated, and lettered people who wrote and campaigned for African unity, in contrast with the more ancient pictographic writings that have a completely different resonance. Du Bois and his peers, while striving and dreaming of a united continent, still, I think, held Africa’s ancient traditions dear to them. Du Bois lived his final years in Ghana and died on African soil. After the British Abolition of Slavery Act in 1807, commemorative plates and medallions were made to strengthen the abolitionists’ cause. I am interested in how a decorative object such as a plate made from fine bone china could be a site for political and social propaganda. As this juxtaposition of the ornamental and the politically conscious is a common theme of my practice, I used the abolition as my starting point and decided to make a piece of work commemorating those who have not often been commemorated in this way. Some of the images on the plates are depictions of slaves, rebel slaves, abolitionists, African, African American, and Caribbean thinkers and radicals. Others are just black faces I wanted to see on that site. Using plates as a site anchors the portraits of Du Bois and his peers as well as more recent figures in a commemorative and decorative firmament of significant figures pictured during significant events.