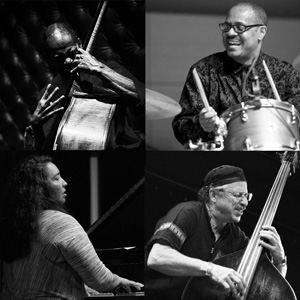 Solo performances and personal reflections by Angelica Sanchez, Avery Sharpe, Reggie Nicholson, and Joe Fonda. They were asked to refect on questions: What keeps you healthy and whole? What needs healing in this world? Can you offer us insight into your music-making? Along with the music you will see photos, scores, simple phrases and longer dialogue in response to these quetsions.

Her music has been recognized in national and international publications including Jazz Times,The New York Times,Chicago Tribune amongst others. She was also the 2008 recipient of a French/American Chamber Music America grant and the 2011 Rockefeller Brothers Pocantico artist residency. Sanchez’ debut solo CD “A Little House” was featured on NPR’s Weekend Edition and her recording “Wires & Moss” featuring her Quintet was chosen as one of best Releases of 2012 in “The New York City Jazz Record (formerly AllAboutJazz-New York).”  Her recording “Twine Forest” a duo with Wadada Leo Smith received Honorable Mention as one of the best releases of 2013 in "The New York City Jazz Record." Her latest trio project “Float The Edge” features Michael Formanek and Tyshawn Sorey and has garnered wide critical acclaim. Sanchez has a Master's degree from Willam Paterson University in Jazz Arranging. She is currently a lecturer at Princeton University.

Sanchez also recently debuted a new piano duo with Marilyn Crispell. A recording is due out for release in 2020. Reggie Nicholson Continuing in the tradition of drummer bandleaders such as Max Roach, Art Blakey, Tony Williams, Andrew Cyrille, Milford Graves and Jack DeJohnette, Reggie Nicholson has firmly established his reputation in this great tradition.

Reggie first gained a reputation as an outstanding drummer and percussionist in his hometown of Chicago. In 1979, he joined the Association for the Advancement of Creative Musicians (AACM), a consortium of composers and performers devoted to the art of improvisation and the creation of original music. Nicholson forged a musical relationship with members of the group including Muhal Richard Abrams, Amina Claudine Myers, Anthony Braxton, Phil Cohran, Ernest Dawkins, Douglas Ewart, Joseph Jarman, Wadada Leo Smith, Henry Threadgill, and Edward Wilkerson, Jr. In 1984, Nicholson premiered his compositions for trio. This was Nicholson’s first “Concept” that established his own compositional approach.

In 1997, Nicholson recorded, Unnecessary Noise Allowed,  his first CD of new compositions for his quintet, The Reggie Nicholson Concept. In 2005, he recorded Percussion Peace for solo percussion and electronics. In 2007, Nicholson composed and performed live Timbre Suite (Tone Colors) for his percussion ensemble. Nicholson’s latest recording, Surreal Feel, shows the maturity and growth of his compositional skills for brass instruments.

Nicholson has performed his music throughout Chicago, Washington, D.C., and New York City, including in the AACM concert series, Kennedy Center, Roulette, The Stone, Hot House, Rituals, Velvet Lounge, the Interpretations concert series, Constellations, Vision Festival, and Sistas’ Place. He has performed in many clubs and festivals throughout Europe and Japan. Joe Fonda Joe Fonda is a composer, bassist, recording artist, interdisciplinary performer, producer and educator.

Fonda was the bassist with the renowned Anthony Braxton sextet, octet, tentet, from 1984 through 1999. Fonda also sat on the Board of Directors from 1994 to 1999, and was the President from 1997 to 1999 of the newly formed Tri-Centric Foundation. He has also performed with the 38-piece Tri-Centric orchestra under the direction of Anthony Braxton, and was the bassist for the premiere performance of Anthony Braxton’s opera, Shalla Fears for the Poor, performed at the John Jay Theater in New York, New York, October 1996.

As a composer, Fonda has been the recipient of numerous grants and commissions From Meet the Composer New York and the New England Foundation on the Arts. He has released twelve recordings under his own name. Fonda was also a member of The Creative Musicians Improvisors Forum directed by Leo Smith, and was the bassist with the American Tap Dance Orchestra in New York City, directed by world renowned tap dancer, Brenda Bufalino.

In 1989, Fonda performed with Fred Ho’s Jazz and Peking opera in its world premiere at the Brooklyn Academy of Music. From 1982 to 1986 Fonda was the bassist and dancer with the Sonomama Dance Company. An independent producer since 1978, Fonda is the founding director of Kaleidoscope Arts an interdisciplinary performance ensemble and is the producer and musicial director for the Connecticut Composers and improvisors Festival from 2001 to 2011.

Two of Fonda’s most recent projects are From the Source, The Off Road Quartet.

From the Source is a group that incorporates the tap dancing and poetry of Brenda Bufalino and the healing arts of Vicki Dodd, and four jazz musicians. The group has released their first CD entitled, Joe Fonda and From the Source, on Konnex Records.

The Off Road Quartet is comprised of four musicians from four different countries. Ux Fengia from Beijing China, Carlos Zingaro from Lisbon Portugal, Lucas Niggle from Zurich Switzerland and Joe Fonda New York USA. The Off Road Quartet blends the musics from all four of these musicians cultures into a unique musicial and visual experence. Avery Sharpe Bassist Avery Sharpe was born in Valdosta, Georgia and his first instrument was the piano. “I started playing when I was eight years old,” he recalls. “My mother is a piano player/choir director in the Church of God in Christ, and she gave lessons to everybody in the family—I’m the sixth of eight children—but it didn’t stick until it got to me.” He moved on to accordion and then switched to electric bass in high school, after his family had relocated to Springfield, MA.

Sharpe’s credits also include sideman stints  and recordings with jazz greats like Dizzy Gillespie, Wynton Marsales, Yusef Lateef, Bobby McFerrin, Pat Metheny Billy Taylor. and many more His first recording as a leader was the 1988 album Unspoken Words on Sunnyside Records. In 1994 he started his own artist record label, JKNM Records. To date he has more than 12 titles as a leader for JKNM Records,

Sharpe is equally adept at songs and longer compositional forms. In 1989, he wrote and conducted the soundtrack for the movie An Unremarkable Life.  A decade later, his six-movement piece America’s Promise debuted with the Springfield Symphony Orchestra. In the 1990’s Sharpe received a commission by the classical group Fideleo to write three extended works. In 2004,  he wrote a musical portrait for the stage for Chamber Music Plus. The stage production Raisin’ Cane, has been touring since 2007 and features the actress Jasmine Guy (featured actress from TV, “A Different World”)  and Sharpe’s Trio. In 2006, he was commissioned by the Springfield Symphony to write a Concerto for Jazz Trio and Orchestra which premiered in the 2007, featuring the Trio with (former “Tonight Show” Musical Director) Kevin Eubanks on acoustic guitar. Avery  continued his historical connection with releases of CDs, honoring Jesse Owens “Running Man”, Sojourner Truth-“Ain’t I A Woman”, Sister Rosetta Tharpe-“Sharpe Meets Tharpe”.

Sharpe’s next project “400” is presently in the works. This project will mark the 400th year since Africans were brought to the U.S.A shores in 1619. The recording is schedule for release in May 2019 on JKNM Records and will feature- Don Braden, Duane Eubanks, Ronnie Burrage, Zaccai Curtis and special guest Kevin Eubanks.

Avery Sharpe was the Sterling Brown ‘22 Distinguished Visiting Artist in Residence in Music at Williams College and is now Artist Associate in Jazz Bass, and Jazz Coach at Williams College. He is also Faculty Advisor for the Williams Gospel Choir and affiliated faculty for Africana Studies.