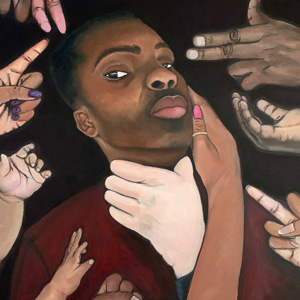 This exhibit is part of the gallery’s 2020-21 theme entitled Healing Bodies. Because many of our bodies whether planetary, ideological, physical, cultural or otherwise, require attention, we have invited visual and performance works that offer new ways of viewing Wellness as defined by our artists.

Featuring works by over 50 artists from 17 countries, Breathing While Black is a juried digital visual art exhibition, inviting international response to the recent and ongoing slaughter of Black Americans. In the midst of the Covid-19 pandemic when the world suffers from the physical and psychological devastation of this plague, not only have Black people in the U.S. been disproportionately affected, but they also continue to be victims of hateful brut force: The police kneeling on George Floyd’s neck, the fatal shooting of Ahmaud Arbery while he was jogging, and of Breonna Taylor in her own home. These are only too reminiscent of the earlier murders of Eric Garner, Philando Castile, and Trayvon Martin. All are symbolic of a 400-year pattern. The countries represented by our bold and talented exhibiting artists including South Africa, Guyana, Chile, Mauritania, Haiti, Yugoslavia, Iran, Nigeria, Philippines, Puerto Rico, Pakistan, England, Cameroon, India, Togo, Dominican Republic, and U.S.

After carefully jurying somewhere around 350 images from, we settled on a little over 100. With a very definite focus to our invitation, it wasn’t until we witnessed the breadth of responses that we could really shape the exhibit. There is so much here. Some works are abstracted emotional responses. Others, hyper-realism. Some reference historical events while some are futuristic and mythical. There are cautionary tales told through the camera lens, ideological symbolism, and use of digital tools to create outrage. And of course, there are those images that will not let us forget the pain of this pandemic that further complicates and accentuates the horrors of racism. Our job as we viewed the entries was to not steer too far from the recent shootings of George Floyd and others referenced in the Call, but also to welcome artists’ emotional and intellectual responses to the larger condition of Black folks in America. By opting to include only the names of artists, titles and mediums of works we’ve offered a more egalitarian landscape. We have high school entries, international commentary, professional artists and those who don’t consider themselves as such. This is far more about capturing viewers’ minds and hearts through imagery and daring them to step up to the work at hand than it is about showcasing artist credentials.

Breathing While Black continues to make an impact, spark conversation, and inspire writers.

Click here to view the publication of Mass Humanities' Clemente Course in the Humanites student's responses to the exhibition.