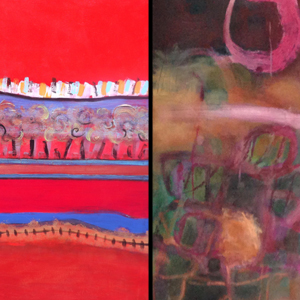 Dianne McMillan Brannen was born in New York City and is of Caribbean descent. Although studied, she is largely a self-taught artist who continues to explore primitive art in everyday life. About her vision, Dianne says, “My work explores the imagery, symbols and colors of pre-classical and tribal societies when the earth was young. Where living colors and raw textures were interwoven with everyday life. The printing process and works on canvas are in a constant dialogue creating effects that surprise me. The images alter themselves like echoes of intent”

Creating her first oil painting on canvas at the age of eight, Dianne continued to study fine art at preparatory school and college, earning a B.A. degree from the College of Wooster and studying French and Art History at the Institute of European Studies in Nantes, France.

With a career background in textiles and apparel, color and design have always been her focus whether in the medium of printmaking, painting or decorative arts. Since 1992, Dianne has participated in exhibitions of her work at galleries and universities, museums, and libraries including The Elaine Benson Gallery, Bridgehampton, NY, and Paramount Studios in Los Angeles, Ca, and The Great Neck Library in Great Neck, NY.

As a curator, Dianne has originated a series of exhibitions at museums and galleries based on Diaspora history and literature including “Black Whalers-Their Tales , Courage and Conquests”, “Whaling- A Cultural History”,  “The Return of the Amistad” and “Genetic Memories—Life Songs of Native Americans”.

Tracey Physioc Brockett’s large scale, landscape-inspired abstractions and small mixed-media pieces examine physical sensations of space, movement, and states of being. She describes her paintings as confabulations – chancy and quirky. Just like life. Because of what she calls “a hitch” in her brain as a child, she became hyper aware of the world as a random, provisional place. What her perfectly good eyes saw was processed with gaps and glitches, stitched together with made-up material. As Brockett notes, “turns out my brain imagined something very much like the sub-atomic universe.” Born and raised in Toronto, she studied at The University of Toronto, Mount Holyoke College, and The School of the Museum of Fine Arts, Boston. She has been in residence at The Vermont Studio Center, and The Cummington Community for the Arts, MA, and received several Massachusetts Arts Lottery grants. She was awarded The Adolph and Esther Gottlieb Individual Artist Grant in 2017 and her work was recently reproduced by the literary journal The Massachusetts Review. She lives and works in rural Western Massachusetts. Tracey Physioc Brockett's website

Augusta Savage Gallery's 2022-2023 season is in partnership with: The Clemente Course in the Humanities