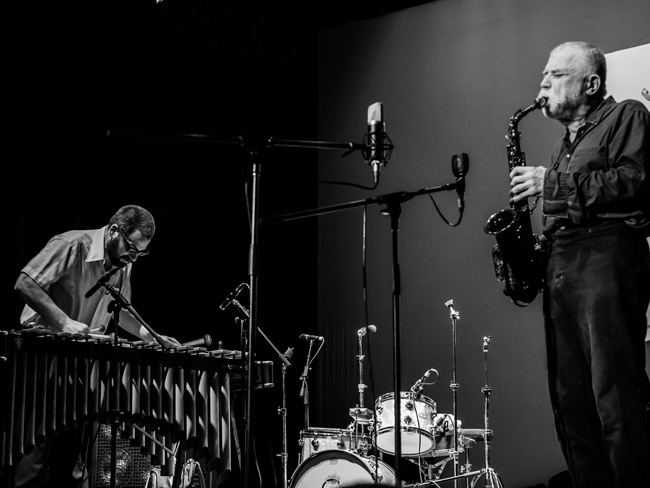 Nate Chinen of the NY Times chose the Duo's only North American performance so far as one of his ten best concerts in any genre of 2011. “Brötzmann has abundant nonstandard technique, but what impresses in his playing isn’t the execution so much as the force of presence,” writes Chinen. “He recently turned 70, and he sounds almost invincible.” The saxophonist is joined by the “deft, dynamic young vibraphonist”, Jason Adasiewicz. For Peter Brötzmann, 40-plus years of playing improvised music has produced - even just on recorded evidence - a list of associates that include just about all the major figures in creative music: Derek Bailey, Cecil Taylor, Han Bennink, Rashied Ali, Evan Parker, Misha Mengelberg, Anthony Braxton, Marilyn Crispell and Andrew Cyrille. Always characterized as an energy player - and the power-rock setting of Last Exit with Ronald Shannon Jackson, Sonny Sharock and Bill Laswell, did little to disperse this conviction - his sound is one of the most distinctive, life-affirming and joyous in all music.

“The huge, screaming sound he makes is among the most exhilarating things in the music,” says Brian Morton, “and while he has often been typecast as a kind of sonic terrorist, that does insufficient justice to his mastery of the entire reed family.”

Born in Remscheid, Germany on 6 March 1941, Brötzmann's early interest was in painting and he attended the art academy in Wuppertal. Soon thereafter, his main occupation became music (though he continues to create visual art.) Self-taught on clarinets, he soon moved to saxophones and began playing swing and bebop. Associations with bassist Peter Kowald, Don Cherry, Alex von Schlippenbach and Steve Lacy during the 1960s brought a new freedom to Brötzmann’s approach. He continues to tour and record widely with Die Like a Dog (Hamid Drake, William Parker and Toshinori Kondo), the Chicago Tentet, and a variety of duo projects.

Jason Adasiewicz (pronounced “Ad-a-SHEVE-its) is a vibraphonist, drummer, and composer, and an integral member of Chicago’s jazz and improvised music scene. His aggressive yet lyrical style can be heard in over 10 working Chicago groups, including those led by Rob Mazurek, Nicole Mitchell, Mike Reed, Josh Berman, and Ken Vandermark. Adasiewicz won the 2011 Downbeat Annual Critic’s Poll in the Rising Star Vibes category, and for the last two years has been nominated by the Jazz Journalists Association as a finalist for ‘Mallet Instrumentalist of the Year’. His quintet Rolldown, and his trio Sun Rooms have each release two recordings. Sun Rooms received top jazz releases of 2010 honors in the New York Times, The Village Voice, The Chicago Tribune, Dusted Magazine and The Chicago Reader. “Jason Adasiewicz’s vibes shimmer in the ether,” writes trumpeter Rob Mazurek, “A true original with a deep sensibility for sound vibration that can be heard through his innate and idiosyncratic approach to harmony and melody. Jason’s musical history is spiked with fervent free improvisation and tight melodic rendering.”