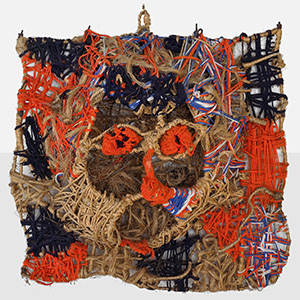 We Wear the Mask Dorrance Hill

Aptly titled in honor of Paul Laurence Dunbar’s iconic poem, We Wear The Mask displays Dorrance Hill’s creative depth and many years of experience in a long awaited exhibit. The sculptor and former UMass professor became a practicing artist in mid-life after working variously and often simultaneously, as a farm hand, car mechanic and painter, construction and masonry worker, and builder, eventually going back to school at the University of Massachusetts Amherst where he earned BFA and MFA degrees. In 1983, he joined the faculty in the Department of Afro-American Studies where he taught studio art classes in clay and plaster, metal and bronze casting, soapstone, wood and other mixed media. Working in metal has always been his favorite medium although he became interested in soapstone after spending a semester working with Inuit artists in Cape Dorest (Nunavut, Canada) where the environment and the people offered a new take on spirituality—in their lives and his own. Over the years, some of his themes have included black baseball players, civilization’s iconic stories, African American life during Reconstruction, animals, birds, and masks. Masks have held a particularly prominent place in Hill’s work, as displayed in the title of this exhibition. In his classes, the first project he would assign his students was to create a mask. As Hill states, “Masks are a part of my experience, and that of my people.” Referring to one of his more recent works, which involves a marriage of sculpture with photographic portraiture, he says, “When it was still on the bench, I looked at my empty mask, which spoke to me entirely of restraint, and I knew it needed to be more. I showed it to my wife, and she ran out of the studio and came back with a portrait so haunting, it was no wonder she had never forgotten it. What you see is the face of Mrs. Naomi Polk, who was born in 1882, in Houston. Mrs. Polk was a determined poet and painter, much influenced by the stories of her grandmother, who was brought enslaved from Africa, and by her deep spirituality. Her life and her work are not known widely, but her portrait is a revelation. She looks neither at you, nor me, but beyond us all.”