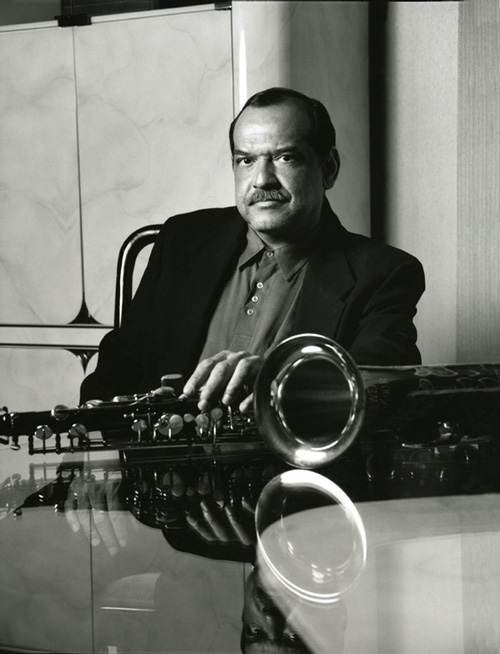 The Joy Of Sax

Two-time Grammy Award winner Ernie Watts is one of the most versatile and prolific saxophone players on the music scene. In a diverse career that has spanned more than 30 years, he has been featured on more than 500 recordings by artists ranging from Cannonball Adderley to Frank Zappa, always exhibiting his unforgettable trademark sound.

"After hearing saxophonist Ernie Watts, it's easy to imagine that he possesses superhuman talents similar to those held by members of the fictional Fantastic Four. He breathes fire, can cool with ice, whip up a storm, and shape his sax sound in ways otherworldly. This is a powerful, yet sensitive, technically Herculean, yet human, complex yet elegantly beautiful player--no, a marvel." Nicholas F. Mondello / All About Jazz.
Two-time Grammy Award winner Ernie Watts is one of the most versatile and prolific saxophone players on the music scene. On Saturday, March 31 at 8:00 P.M. in Bowker Auditorium, Watts will bring his finely-honed, distinctive sound to UMass. He’ll be backed by the cream of the University’s jazz performers, the UMass Jazz Ensemble I, under the direction of Jeffrey W. Holmes and Thomas Giampietro. The concert is presented in conjunction with the 14th-Annual High School Jazz Fest, where the state’s most promising young players will vie for the honor of opening the evening’s proceedings at 7:30 P.M. on the Bowker stage. 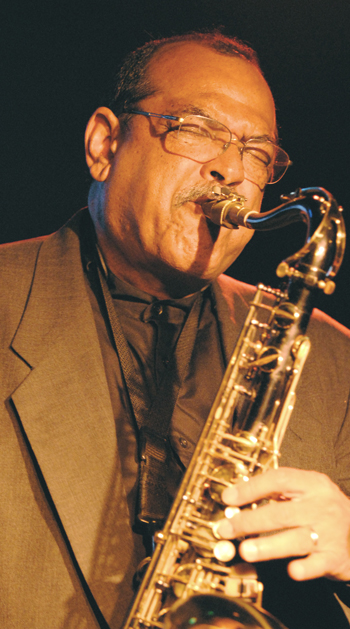 Ernie Watts started playing saxophone at age 13 in Wilmington, Delaware. He went with a friend who was joining the local school music program and found himself carrying home an instrument too. “I was a self-starter; no one ever had to tell me to practice,” remembers Watts. His discipline, combined with natural talent, began to shape his music-infused life. He won a scholarship to the Wilmington Music School where he studied classical music and technique. They had no jazz program, but his mother provided the improvisational spark by giving Ernie his own record player plus a record club membership for Christmas. The first record club promotional selection turned out to be the brand-new, monumental, Miles Davis album Kind of Blue, which featured Bill Evans, Jimmy Cobb, and, of course, the inimitable ‘Trane at the height of his career. “When I first heard John Coltrane play, it was like someone put my hand into a light socket,” Watts says. He started to learn jazz by ear, often falling asleep at night listening to a stack of Coltrane records. Although he would enroll briefly at West Chester University, he soon won a Downbeat Scholarship to the Berklee College of Music in Boston, renowned as a nursery of American jazz. During the 1970s and ‘80s, Watts was deeply immersed in the busy production scene of Los Angeles. His signature sound was heard on countless TV shows and movie scores, almost all the early West Coast Motown sessions, and with pop stars such as Aretha Franklin and Steely Dan. Though the pop music genre placed narrow confines on his chops, the studio sessions allowed Watts a chance to constantly refine his tone. Even after years in the studios, Watts’ passion for acoustic jazz never left him. At the end of a long day of sessions, he could frequently be heard playing fiery jazz in late-night clubs around Los Angeles. Watts has been featured on over 500 recordings by artists ranging from Cannonball Adderley to Frank Zappa, always exhibiting his unforgettable trademark sound. Recently, Watts has recorded a new Quartet West album with Charlie Haden, and also works with vocalist Kurt Elling, whose album Dedicated To You, featuring Watts, won a Grammy in 2010 for Best Jazz Vocal Album. In 2012, Watts once again teamed up to tour with former Johnny Carson band leader Doc Serverinsen in Severinsen's Big Band as guest soloist. He tours Europe twice a year with his own Ernie Watts Quartet, and is often a featured artist in Asia, as well as in summer jazz festivals the world over. His record company, Flying Dolphin Records, produces his own music with his U.S. quartet as well as his European band.

To hear full tracks head over to his official website or to purchase music go directly to the itunes store.