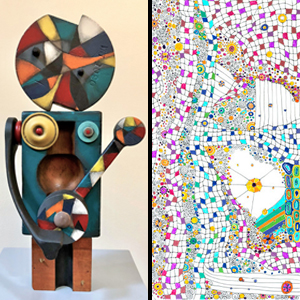 Shawn Farley’s Constructions are comprised of foundry molds, wood, oil, latex and/or acrylic paint and have been both exhibited and collected extensively. To embark on her her work, she searches flea markets and seeks out junk dealers from all over the country who clean out the closed and abandoned machine foundries of their wood patterns or molds, unique pieces formed by talented craftsmen long ago that are on their way to becoming the trash of history.  As she explains, her process is one that embraces chance. “These objects radiate personality and voice, demanding an opportunity at another life. Since foundry molds come in all shapes and sizes, it is often playing with them that dictates what they will become. I may have a piece nearly finished when by chance, I place another piece next to it rather than on it and it changes the entire direction and meaning of the piece. I love when that happens as it offers a more inspired completion to the piece. While some of my constructions often express personal views on social, political and religious issues, others are purely automatic. Freed from their destiny as castaways or trash, these objects assume new identities and an evocation of something soulful. Perhaps they are emblems of our humanity.”

Lois Guarino, artist, writer, and teacher is widely exhibited, and collected. She is the recipient of numerous awards and grants, including two fellowships from the New York Foundation for the Arts.  With a focus on the interconnectedness of all living things, she describes the drawings on view in this exhibition as a departure for her, coming from a place beyond consciousness. “I made them while under tremendous stress while grieving and, to my amazement, the heavy feelings were transmuted into some of the most hopeful imagery I’ve made. Each drawing is a complete surprise, a game of chance. My pen begins making marks and I follow the obsessive lines until completion. It is only after the drawings are finished, and in relationship to each other, that I see the patterns in the seeming randomness. Order and chaos co-exist in everything living.” Lois Guarino's website