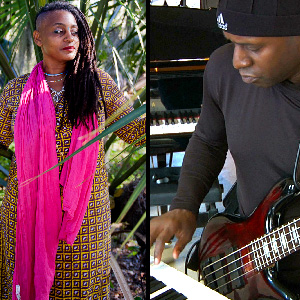 
Régine Romain: Brooklyn to Benin: A Vodou Pilgrimage A film viewing by Haitian-American artist, educator and anthropologist Régine Romain is followed by a conversation with UMass professor Judyie Al-Bilali. This short film is the manifestation of Romain’s artistic inheritance as a Haitian-American storyteller, craftswoman and spiritual alchemist. It chronicles her three-year sojourn across the turbulent Trans-Atlantic slave history to return to Benin - the birthplace of Vodou, an ancient West African religion. Its narration and visual images guide viewers away from the historic misrepresentation of the religion and allow the dynamic elements of Vodou’s songs and dances to heal bodies, minds and souls while creating new narratives that both strengthen its survival and revival. As Romain states, “The world psyche is awash in distorted perspectives of Vodou and its practitioners. My artistic endeavor is to stoke the collective imagination and keep alive new ways of seeing.” Régine Romain fuses her interests in travel, culture and music to explore the range of spiritual and tangible worlds. With over twenty years of making art, researching, teaching, and community activism she produces culturally transformative workshops, salons, exhibits, festivals, and forums.  A recipient of the NYSCA 2015 Folk Arts Apprenticeship, her photographic work on Vodou appears in MFON: Women Photographers of the African Diaspora. She is also a published writer and the editor of Diaspora Diaries: An Educators Guide to MoCADA Artists. Her photo essay on Haiti is featured in Meridians, Vol 11, No. 1, a journal published by Indiana University Press. Régine is the founder/director of Urban PhotoPoets, Brooklyn Photo Salon and now the WaWaWa Diaspora Centre, which is an inter-generational arts, education and exchange project in West Africa. She received her B.S. in International Studies from Bowie State University and Masters in Photography & Urban Culture from Goldsmiths, University of London. Jo Sallins A performance by veteran multi-instrumentalist and highly skilled teacher Jo Sallins debuts a new recording. With over 35 years of performance experience, Jo Sallins brings his precision and power to the bass, drums and piano with equal confidence. Both trained and self-taught, he has toured Asia, Canada and West Africa and for nearly two decades has offered educational programs with Tony Vacca’s World Rhythms. He has performed with the likes of Alvin Ailey and Dan Akroyd, and has opened for Mongo Santamaria, Yusso N’dour and Chaka Khan. But, most notably, he has been an essential member of the Pioneer Valley creative community for decades.