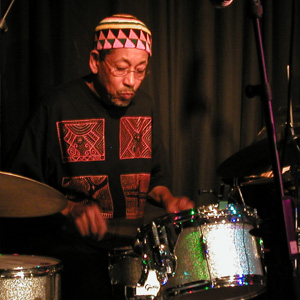 Warren Smith Duo The New York master percussionist Warren Smith in a rare performance with saxophonist and flutist Andrew Lamb. Warren Smith’s extraordinary career spans eight decades. He has worked with such legends as Miles Davis, Leonard Bernstein, Nat ‘King’ Cole, Aretha Franklin, Harry Partch, Barbra Streisand and Janis Joplin (for whom he served as Musical Director in the late ‘60s), and had his first major feature in popular music on Van Morrison’s seminal Astral Weeks album. He was a co-founder alongside Max Roach of the renowned percussion ensemble M’Boom, with which he remains a co-leader. Smith also ran the influential Studio WIS in NYC, nurturing scores of artists for over 30 years as the longest-running loft in the historic scene that revolutionized the contemporary jazz environment. Born and raised in Chicago. Warren moved to NYC in 1958 after earning his B.S. in Music Education from the University of Illinois Urbana/Champaign to pursue his Masters of Music in Percussion from Manhattan School of Music. His teaching experience includes 10 years in the New York City Board of Education, three years at Adelphi University and 25 years at SUNY Old Westbury. Additionally, Warren Smith’s extraordinary documentation of seventy-plus years of African American music and history has produced an amazing archival treasure that includes thousands of recordings, photographs, videos and artifacts of an astonishing era. Born in North Carolina and raised in Chicago, saxophonist and flautist Andrew Lamb entered New York City’s avant-garde community during the 1970s, becoming an active presence in the Bedford-Stuyvesant arts world. Lamb studied with AACM charter member Kalaparusha Maurice McIntyre and is the recipient of a Brooklyn Arts Council grant. He has performed and recorded with bassist Wilber Morris, drummer Andrei Strobert, Eugene Cooper and Andrei Strobert, and in 2003 released Pilgrimage on CIMP with Tom Abbs and Andrei Strobert, as well as a later release with his group The Moving Form, Year of the Endless Moment (Engine Studios). Lamb has also recorded with Henry Grimes’ Sublime Communication trio Live from WKCR (2004) and Live at Edgefest in Ann Arbor (2005), both on the JazzNewYork Productions label. Andrew Lamb and his own ensembles remain a regular presence in the New York area, and since 1996 have frequently performed at the annual Vision Festival. Lamb has been part of Alan Silva’s big band project, the Sound Visions Orchestra, and has also been a member of the Cecil Taylor big band. In 2005, Lamb played in the Sublime Communication trio in Berlin, and in the Henry Grimes Quartet with Marshall Allen and Hamid Drake.