Gems in the Valley: A Toast to Nelson Stevens 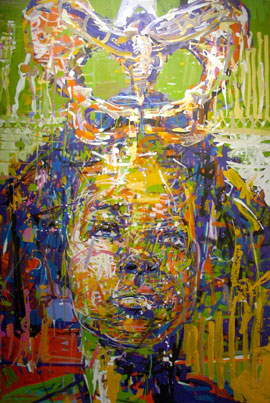 Augusta Savage Gallery    free and open to the public.

Showcasing a range of styles and mediums dating back to the 1970s, Nelson Stevens" works on paper, canvas, doors, board, album covers, and prints in magazines and calendars attest to his prolific career as a visual artist, teacher, arts activist, and cultural ambassador. Some works in this show are on loan by collectors, while others have been part of the Augusta Savage and Afro-American Studies permanent collections. Nelson Stevens received a BFA degree from Ohio University and MFA degree from Kent State University. Early in his training, he found himself in the position of having to prove to his professors in the Art Department that there is in fact such a thing as “Black Art." Asserting that prejudice did indeed exist in the art world, he refuted the popular “art for art sake" paradigm, insisting instead that “art is for the sake of people." Nelson Stevens taught for over 30 years both in the Art Department and the Department of Afro-American Studies at the University of Massachusetts Amherst. He has always advocated for and promoted aesthetic integrity within the Black community, catapulting numerous groundbreaking projects that are rooted in a strong philosophy concerning the cultural currency of African Americans. His signature style, which applies bold color, unexpected lines, and unabashed tributes to historical and contemporary iconic figures, is well known to many. Stevens was an early member of the pioneering Chicago organization AFRICOBRA along with other reknowned artists such as Wadsworth Jarrell, Jeff Donaldson and Adger Cowans. Nelson Stevens" work may be found in many private and public collections including the Smithsonian, Schomberg's Library and Research Center in New York City, and the Chicago Institute of Art, among others. His widely acclaimed project, “Art in the Service of the Lord" commissioned African American artists to create sacred works for a Black Christian Fine Arts Calendar that existed for four years and circulated 15,000 copies annually.