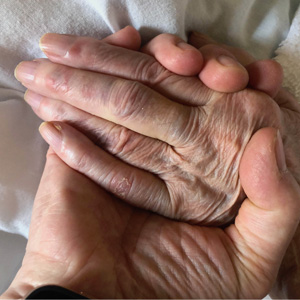 Add to my calendar

Becoming a Parent to My Mom Gillian Jones

This exhibit is curated from hundreds of photos by photojournalist Gillian Jones. It documents the time during which Jones was a caregiver to her mother, who suffered from dementia for nearly five years before her death in May, 2021. It is an effort to shine light on the topics of aging, caregiving, and death. Gillian Jones has been a staff photographer, news writer, and columnist for The Berkshire Eagle since 2014.

As a photojournalist for the last 30 years I have had the privilege to document events in The Berkshires of Western Massachusetts. You could say I photograph people at their best and their worst. Whether I am covering an athletic event, graduation, parade, accident, fire, military funeral or just daily life, I am always pointing the camera and documenting the lives of  others. Photojournalists are often criticized for documenting the more difficult aspects of life that are hard for us to see. Some are even accused of being insensitive. But to do their job effectively they must be empathetic. To document the journey of my mother’s dementia, from a year-long stint in a nursing home to her death, was a gift to share with others. In addition to photos, which I shared primarily on social media, I also have been writing a monthly column on caregiving for The Berkshire Eagle since 2018.

Gillian Jones has been a staff photographer, news writer, and columnist for The Berkshire Eagle since 2014. She began her career at the North Adams Transcript in 1992. She has been an adjunct professor teaching photography and journalism at the Massachusetts College of Liberal Arts since 2001. In addition to her daily photographs in The Berkshire Eagle, she is a regular contributor to the Associated Press wire service. She was born in Queens, NY and grew up on Long Island before moving to the Berkshires in 1982. She illustrated the book, “B is for Berkshires,” by Islandport Press which was released in 2015. She won “Best Portrait” photo award in 2018 New England Newspaper and Press Association Better Newspaper Competition which featured a child in the Fall Foliage Children’s Parade. She resides in North Adams with her dog and four cats. She enjoys hiking with her dog Rufus and bicycling the Ashuwillticook Trail with her boyfriend Dan.