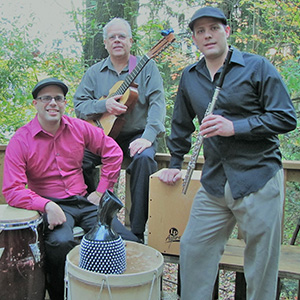 Ahmed Gonzalez - flute/percussion/guitar - a young lion of Puerto Rico's thriving Latin jazz music scene. Ahmed studied classical flute with Smith College Flute instructor (and Julliard graduate) Sue Kurian. His dedication to jazz and Latin music have led him to perform and record with many top artists. His debut CD "Flute Soul" is now a certified bestseller and he can be heard on WEIB Smooth Jazz Radio where he has charted three of his songs. Equally versatile in Latin, Jazz, Classical, Rock and World Music, his beautiful expressive tone and impressive improvisational skills have made him a much in demand player in New England.

Rene Gonzalez - Latin Percussion/Bass Guitar - one of the most versatile of the new percussionists on the Latin scene today. Rene studied at the UMass Music Department and has developed an impressive technique and knowledge of Afro-Cuban/World music through constant study and performing with masters of percussion such as Giovanni Hidalgo , Paoili Mejias, Trilok Gurtu and Steve Berrios. His skills on congas, bongos, timbales, drumset, cajon, bata drums and his continuous exploration of Latin Percussion make him a walking encyclopedia of Latin music. From Big Band to Cuban drumming -he does it all! And to top it off he is easily one of the best bass players around!!