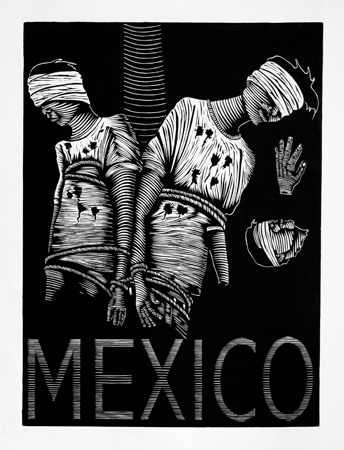 Born in Artesia, New Mexico, and one of eleven children, Juan R. Fuentes credits the turbulent times of the ‘70s for setting the tone to his socially charged approach to his work. He says, “the Chicano, African American, Middle East, Asian and Native American struggles for equality, peace and justice helped shape a consistent theme and source for my art.” Fuentes’ parents were migrant farm workers born in Texas, who later moved west to the farm labor camps of California in search of work. Relocating from labor camp to labor camp, Fuentes attended five elementary schools before finally settling outside Watsonville, California. Strongly influenced by the Social Realist tradition of Latin American printmaking, he began his career as a poster maker and silkscreen print artist. The substantive body of work is now part of the historical Chicano Poster Movement. In 1997, Juan Fuentes produced his first linocut. About his work, he says: I have been exploring relief printmaking, in particular woodcut and linoleum cut techniques and using this relief medium to express the strength and humanity within our collective communities. It has been my goal to portray people in a bold and colorful manner and the use of this traditional medium has allowed me to achieve this. The simple act of drawing and carving on a flat surface to produce a desired effect has been challenging and rewarding, in contrast to these contemporary times of instant electronic imaging. The ability to produce multiplies by using mostly hand tools in combination with a press still continues to amaze me after so many years, I feel that there is an endless curiosity to produce the next print. The artist currently works out of his studio, Parjaro Editions, with is part of a larger Collective of Chicano/Latino print studios in the U.S. called Consejo Grafico. The Collective works to promote and help sustain our Talleres (workshops) nationally, creating exhibits and print portfolios that are sold to raise funds. Their projects have included producing images for AIDS awareness, immigration, and obesity in the Latino community. Juan R. Fuentes