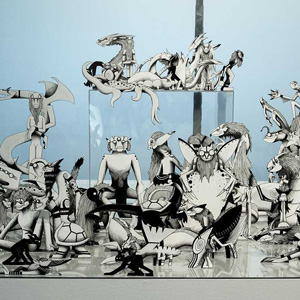 Myths have the power to both reflect and effect the psychology of their contributing cultures. Through a developed creative language, mythology allows the human psyche to create the world anew, showcasing the human propensity towards imagination. It is through this creative process that a single species utilizes its imagination to attempt to understand its environment, regardless of cultural or external contexts.

I remove myths from their cultural contexts, stylistically uniting them through similar form, line, material, and composition. The figures are illustrated on thin paper with black ink, held upright in space by steel armature. They cast their shadows on the surrounding surfaces, leaving the viewer with a sense of a fantastic realness in their presence. By removing the identifying cultural cues found in these legends, characters like Quetzalcoatl and Zmey Gorynych can be placed within the same cultural realms as each other, even though their origins are disparate in time and space. In doing this, the myths are able to represent the larger culture of humanity and the underlying psychology behind the myths we create.

Each figure presented in the space represents a different mythological figure, presenting the diversity and ingenuity of human imagination through overwhelming numbers. These figures welcome the viewer, engaging the audience in a conversation of imagination and creativity. The figures’ shadows present a unique frieze of ambiguous forms, providing the audience with an opportunity to create new figures, narratives, and interactions, engaging in the creative process that has inspired humans for millennia.

Kenny Harris – biography Kenny Harris was born in Syracuse, New York, and attended Jamesville-Dewitt High School. He earned his BFA in Painting and BS in Psychology from SUNY Brockport in Brockport, New York, while organizing a small non-profit community theatre organization. He went on to earn his MFA in Studio Art from Moore College of Art and Design in Philadelphia, Pennsylvania, with a thesis focusing on mythology and its role in contemporary art, as well as its role in contemporary media.

Kenny currently works as an Associate Lecturer at Cazenovia College in Cazenovia, New York, and serves as an administrator and exhibit committee member at Chittenango Landing in Chittenango, New York. Kenny has shown in multiple group and solo exhibits through the United States. His group shows include Beasties at the Sebastopol Center for the Arts in Sebastopol, California, Wham-O at Artist’s Milepost in Portland, Oregon, and, most recently, Chasing the Tale at the Albany International Airport. He has exhibited solo shows in Garrison, New York, Syracuse, New York, Manchester, New Hampshire, and Rochester, New York. His artwork explores the cultural and psychological connectivity of mythology through whimsical, graphic, figurative forms. Comments