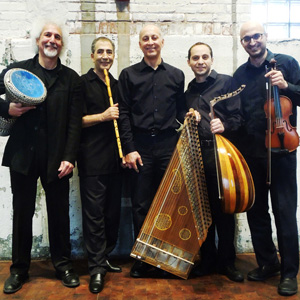 For Arabic music at its finest, join us when Layaali's 8-member ensemble presents a series of their classic performances accompanied by a conversation featuring its director and one or more of the ensemble members. Earning wide acclaim at sold-out performances throughout the U.S. and internationally, the musicians hail from Palestine, Lebanon, Syria, Jordan and Morocco. Layaali offers instrumental pieces that stretch the players’ limits as well as mournful songs that unfold like short stories in the warm and inviting voices of the vocalists with a repertoire including great classical compositions of the 19th and early 20th century masters as well as popular folk songs and contemporary works. LAYAALI is a group of talented musicians whose love and dedication to Arabic music have earned them wide acclaim from both ethnomusicologists and audiences at sold-out performances throughout the U.S. and internationally. The ensemble is committed to performing the traditional music of the Arab world and to preserving the rich legacy of Arabic culture through soulful vocals, hypnotic instrumental improvisations, electrifying percussion, and faithful renditions and recordings of master works. LAYAALI’s mission is to increase the awareness of Arabic music and culture through concerts, recordings, workshops and lectures. The musicians, who come from four Arab countries – Palestine, Lebanon, Jordan and Morocco -- include: Jamal Sinno (qanun and vocals), Muhammed Mejaour (nay), Abdul-Wahab Kayyali (oud), and Michel Moushabeck (tabla, riqq, daff). Members of the ensemble have performed at major international concert halls (London’s Peacock Theatre, Singapore’s Victoria Theatre, Paris’s La Salle Gaveaux), at museums (Boston Museum of Fine Arts, the Porter-Phelps Museum), at colleges and universities (Yale University, Williams College, Amherst College, Boston University, Harvard University, Hampshire College, Smith College, University of Massachusetts at Amherst, Georgetown University, Rutgers University, University of Delaware, and many others), at world music festivals (Flurry Festival, Balkan Night, Boston International Festival), at notable music halls (Club Passim, The Iron Horse, Whitney Center for the Arts) and at church concerts nationwide.  Bios Abdul-Wahab Kayyali commenced his oud studies in 1989 at the National Music Conservatory of Amman, Jordan under the tutelage of Sakher Hattar. While in Amman, he also received tutelage and guidance from Iraqi oud virtuoso Munir Bashir. As a soloist and a member of the Conservatory’s Arabic Music Ensemble, Kayyali participated in many of the Middle East’s musical and cultural festivals, including Jerash Festival for Culture and Arts, the Arabic Music Festival in Cairo, and the Young Musicians of the Gulf Competition in Bahrain (where he won the first prize). In the United States, Kayyali has performed as a soloist in the Arabesque Mondays Oud Festival of Club Passim (Cambridge, MA), and as a member of the University of Chicago Middle East Music Ensemble. He has also performed with Layaali Arabic Music Ensemble of Massachusetts, Saltanah Arabic Music Ensemble of Washington, DC, and the National Arab Orchestra of Michigan. In 2012, he founded Juthoor Ensemble in Amman, Jordan, which performs and records his own original compositions and arrangements. A highly accomplished qanun player, Jamal Sinno has performed with leading Arab musicians worldwide and at notable concert halls, including La Salle Gaveaux in Paris and The Victoria Theatre in Singapore. He studied qanun performance and theory with Muhammad Sabsabi at the Lebanese Conservatory of Music and later played with Salim Sahhab, the acclaimed conductor of the Arab National Musical Ensemble. Since moving to the U.S. in 1980, he has performed with Simon Shaheen, toured with Iraq’s Kazem as-Saher, and was a member of Anatolia, with whom he recorded Lost Songs of Palestine. He taught qanun at Mount Holyoke College’s Arabic Music Retreat for over 20 years and has been a member of Layaali Arabic Music Ensemble since 1992. A Palestinian, born and raised in Beirut, Michel Moushabeck is a versatile percussionist with over 40-years experience in tabla, riqq, and daff performance. In addition to classical Arabic, he is comfortable playing a variety of musical styles from jazz to flamenco to Afro-Cuban congas. Michel came to the U.S. in 1979, attended New York University, and has since performed at notable concert halls worldwide. For 28 years, he has been the lead percussionist with Layaali Arabic Music Ensemble. He played riqq, tabla and daff on the music soundtrack of an award-winning BBC/WGBH documentary on Islam, which aired as part of the series The People's Century. His recording credits include two albums: Lost Songs of Palestine and Folk Songs and Dance Music from Turkey and the Arab World. He is the author of several books and he lectures frequently on Arabic music and literature. He teaches percussion at Amherst College and makes his living as an editor and publisher. Moroccan born nay (reed flute) player, percussionist, and flute maker, Mohammed Mejaour is a brilliant exponent of the Arabic classical repertoire and a leading interpreter of contemporary works. He is known for bringing the nay’s hauntingly beautiful sounds to audiences throughout the U.S. and Europe for over three decades. Born into a musical Berber family, he was taught rhythm (playing spoons) and chant by his mother at the age of five. He joined the House of Youth Ensemble at age eight and in his teens he earned his living as a street performer and storyteller. Since moving to the U.S. in 1981, he has toured with many leading vocalists and Middle Eastern ensemble. He is a 28-year member of Layaali Arabic Music Ensemble, with whom he recorded Lost Songs of Palestine.