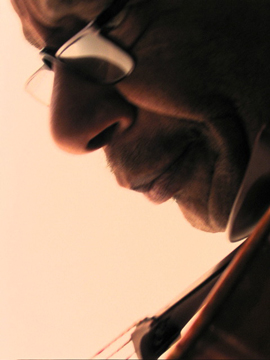 Leroy Jenkins has been a pioneer and influential figure in the world of improvised music for over three decades. He began his violin training as a child, received a B.S. in Music Education from Florida A&M University in 1961, and then taught music in the schools of Alabama and Chicago. Having studied classical violin, he was also influenced by the great jazz masters, and found a way to meld the two influences when he joined the Association for the Advancement of Creative Musicians, a pivotal Chicago organization which originated a vibrant new form of creative improvised music. Moving to Paris in 1969, Jenkins toured Europe with his first group: The Creative Construction Company of Chicago, with Anthony Braxton and Leo Smith. In 1970, he came to New York and formed another cooperative, The Revolutionary Ensemble, a trio of bass, violin, and drums, which toured internationally to critical acclaim, and went on to record five albums. He also developed his solo compositions and premiered his first works in this format at a concert at the Washington Square Peace Church in Greenwich Village. In the ‘70s and ‘80s Jenkins received major support for music composition with many grants and commissions for chamber ensemble, orchestra, dance, and theater - from the National Endowment for the Arts, New York Foundation for the Arts and the New York State Council for the Arts. During this period, in addition to touring as a soloist and with various instrumental groups under his leadership, his music was performed by the Brooklyn Philharmonic, the Albany Symphony, the Cleveland Chamber Symphony, the Kronos Quartet, the Dessoff Choirs, the Pittsburgh New Music Ensemble, and the New Music Consort, among others. Jenkins also toured and held residencies at many American universities including Oberlin, Bennington, Harvard, Brown, University of Michigan, Williams, and Duke. He was invited to be guest composer/ master teacher/performer at organizations such as the Della Rosa of Portland,Tom Buckner's Interpretations series in New York, the American Composers series at the Kennedy Center, the Atlantic Center for the Arts, and the Atlanta Virtuoso, and the First American Violin Congress (Artistic Director: Sir Yehudi Menuhin) Jenkins serves on the Board of Directors of Meet the Composer in New York and the Atlantic Center for the Arts, and as Artistic Director and Board Member of Composers" Forum. He has sat on many panels for music including the National Endowment, the Herb Alpert Foundation, The Bush Foundation, The Pew Charitable Trusts, New York Foundation for the Arts, and the New York State Council for the Arts. He placed numerous times in critics" and readers" polls in Downbeat and Jazz Magazine. In 1989 Jenkins was commissioned by Hans Werner Henze for the Munich Bienale New Music Theater Festival to write the opera/ballet, Mother Of Three Sons, choreographed and directed by Bill T. Jones. It premiered in Munich and was later staged by the New York City Opera, the Houston Opera, and was broadcast on German television. He received a Bessie (New York Dance and Performance Award) “for the lyrical, intricately constructed river of jazz and opera". In groupings from solo to chamber orchestras, Jenkins has recorded 25 albums/ CD's, nine of which have been reissued. His most recent touring group was formed in 1999 (Equal Interest, a trio with violin, piano, and woodwinds). The British Arts Council commissioned its members to write pieces for the group and nine British musicians which were performed on a ten city tour of England. Jenkins also tours with dancer Felicia Norton (solo violin and dancer) and was commissioned twice by Lincoln Center's Out of Doors Series for collaborations with choreographers Molissa Fenley and Mark Dendy. Other recent projects have been a commissioned piece for tenor, baritone, and brass quartet which was performed at Merkin Hall as part of the World Music series in New York, in San Francisco and at North Florida State University. In 1998, the Cleveland Chamber Symphony performed and recorded Wonderlust, his piece for chamber orchestra and two soloists. During the spring semester of 2001 Jenkins was been at the Other Minds Festival in San Francisco, California Institute for the Arts, the Contemporary Museum in New Orleans, the Chicago Jazz Festival, as well as international jazz festivals in Portugal, Sardinia, and Canada. In the late 90's Jenkins was commissioned to write several music/theater pieces with grants frArtist in Residence at California Institute for the Arts. Most recent appearances have om the Rockefeller Foundation. Fresh Faust used rap artists and was presented in workshop at the Institute of Creative Arts in Boston. The Negro Burial Ground, a cantata, was presented in workshop at the Kitchen Center in New York. A later work, The Three Willies (2001) was presented at The Painted Bride in Philadelphia and at the Kitchen Center. Currently, with support from the Rockefeller Foundation and the New York State Council of the Arts Jenkins is developing a new theater/opera piece with a working title of Coincidents. The first section was presented in workshops at The Kitchen Center in July, 2003. In the fall of 2003 he was awarded a composition grant from Harvard's Fromm Foundation to continue this project. In 2004 he was again supported in his work on Coincidents with a Guggenheim Fellowship. He is currently touring with the Revolutionary Ensemble and Equal Interest.