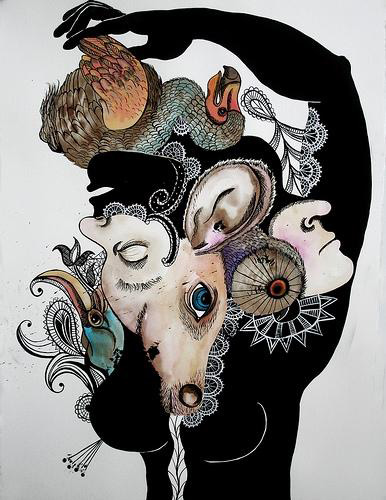 NewYork artist Michele Basora's solo exhibition Walking the Venus Copper presents several new paintings on canvas and paper that explore images of humanity and its innate relationship to nature. Her works accumulate a mythology that is more than the sum of its parts. Superstition andmythology as genres have always exerted a strong influence on her work and continue to surface in the new works exhibited here. Basora has been exhibitedat the Tricia Collins Contemporary, White Box, and Dorian Grey Gallery in New York City and The Aldrich Museum of Contemporary Art in Ridgefield, CT, and hasbeen reviewed by Roberta Smith of The New York Times and Merlin James of The Burlington Review in 2000. Her work was included in "The Saints of Modern Art: The Ascetic Ideal in Contemporary Painting, Sculpture, Architecture,Music, Dance, Literature, and Philosophy" by Charles A. Riley, published by The University Press of New England, 1998. Basora tells us that Venus, the daughter of Jupiter and Dione, was atfirst the goddess of gardens. The dove and the sparrow are her birds, Friday her day, and copper her metal. There's a mystical lure in Basora's work that invites the viewer in to a world inhabited by creatures part human/part animal. It's an invented world made believable through Basora's deft handling of brush to canvas and paper.