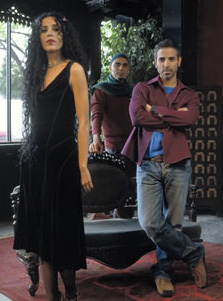 Niyaz brings excitement and mystery to the stage with performances that integrate traditional sounds from Iran and India with 21st century technology. The music is at once hypnotic, transcendent, and eminently danceable. Azam's spell-binding voice evokes images ranging from medieval Europe, to the Middle East of the 21st century. A veteran of film soundtracks (The Matrix: Revolutions) and television programs (The Agency, Alias), Azam's voice is a glorious, unforgettable instrument (Billboard). Perhaps best known as one half of the duo Vas, Azam is quickly becoming known as a stunning vocalist whose attentiveness to the music and expressiveness of the lyrics captivates the listener. She is joined by Loga Ramin Torkian whose mastery of the guitar, Turkish saz, and electric guitarviol has already brought him critical acclaim via his group Axiom of Choice. These two co-leaders of the 5-piece ensemble create a finely tuned balance that ushers in a new era of artistic possibilities for Iranian music. Their first eponymous album weaves together ten mystical poems written by some of the greatest Sufi poets of all time, with music accessible to a modern audience. The music moves across centuries and landscapes, integrating traditional acoustic instruments, rhythms and tonalities with new electronica. Joining them is two-time Grammy award nominee Carmen Rizzo (Seal, Alanis Morisette, Khaled, etc) whose skill in manipulating sounds via the laptop brings this timeless music into the 21st century. Presented in collaboration with the Fine Arts Center's Center Series

The Vallye Advocate, Apple, The River 93.9