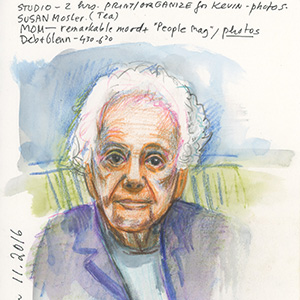 Lynn Peterfreund has been drawing, painting and doing printmaking for decades, working both abstractly and representationally. Observational drawing has been the basis of it all, informing other work done from memory and imagination. Her daily drawings represent an ongoing commitment, begun almost ten years ago, to doing a drawing every day. These include a thematic image drawn alongside her daily jottings of thoughts, tasks, and observations. In 2012, the theme was tea cups. Then, in 2013 it was trees and since 2014, she has been depicting people - relatives, friends, colleagues, students, and occasional public and random figures.

Peterfreund says, “Drawing a person brings them to my full attention, identifies what feels important about them or the interaction with them, and as a whole, the drawing journal keeps time for me. In exhibiting these personal drawings, besides hoping to entertain and uplift, my intention is to inspire the viewers to observe what stands out for them in their daily lives.”

Born in NYC and raised in Northern New Jersey, Lynn Peterfreund has taught television production at Hunter College and worked at Downtown Community Television Center making and teaching video. She has taught drawing and painting at Smith College, Guild Studio School, Zea Mays Printmaking, and privately in her own studios. She is an active member, instructor and mentor at Zea Mays Printmaking in Florence, a studio nationally known for innovative, safer printmaking practices. Her work is featured in public and private collections, including The Mead Museum at Amherst College, Yale University Gallery of Art, the University of Michigan Library, Hampshire College Special Collections, Portland Museum of Art, the DeCordova Museum of Art, New York and Boston Public Libraries, University of Massachusetts, the City of Northampton, Town of Amherst, Cooley Dickinson and Baystate Hospitals, and the Meditech Corporation.