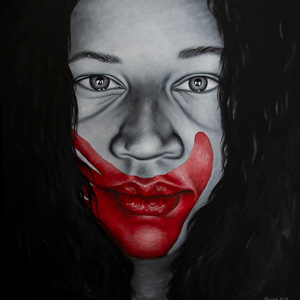 Add to my calendar

Portraits in Red: Missing and Murdered Indigenous Women and Girls began on May 5, 2020 with one painting, "Lauraina in RED," created for the National Day of Awareness for Missing and Murdered Native Women and Girls. Nayana LaFond put out an open call, saying she would paint a couple more portraits if people sent information on subjects. She received more than 25 the first day with stories and photos, and decided to dedicate herself to painting all she receives. Each portrait is of someone who is missing, was murdered, survived, their family member or friend, or an activist/hero fighting for the cause. Through her work LaFond hopes to make sure the missing and dead are never forgotten, to raise awareness about this serious issue, and to provide help with healing to the families she works with. LaFond continues to receive new images and stories and has an ongoing queue of 20-30.

"After leaving art school I went on to own and run a cafe and record label as well work as a curator for over 20 years in various galleries and museums, 8 of which as Chief Curator. Through my work as an art organizer I have been honored to now sit on the executive board for Artist Organized Art as well as several other arts and cultural boards. My paintings and sculptures can be found in galleries, museums and private collections around the world.

My Art is primarily acrylic paint on canvas, sometimes integrating ink, cloth, thread and other materials into my work. I paint paintings & sculpt using epoxy, metal, glass and concrete as well as found objects and my old medical supplies.

Life has been my inspiration. Through challenges and surviving seemingly insurmountable odds art has been my outlet and the place I could express that which could not be said. The majority of my work carries themes of social justice and as such I have been labelled as an "Artivist" (art-activist). My work reflects themes from my experiences as a woman of mixed race and a Domestic abuse and cancer survivor."

How We Go Missing: The Anishinaabe Theater Exchange

The Anishinaabe Theater Exchange examines stories of Indigenous relatives through performances of survivance against colonial violence, lateral violence, and invisibility.   The phenomenon of missing and murdered Indigenous relatives has reached pandemic levels in the United States, Mexico, and Canada. The statistics on missing and murdered relatives are too numerous to count. The systemic wiping out of Indigenous lives in North America is barely a blip on the radar screen of the average citizen, unless they are connected to Indigenous communities and the struggles faced in these contemporary societies. Colonial violence, state sanctioned terrorism, and even lateral violence plague these communities today. The past is not so far away and the ways in which we disappear have altered with time. John Trudell once said, “… We have been the colors on a chameleon’s back. Changing with time. Altering the larger pattern. Surviving genocide because we have to.” The earth has a rhythm. The past has a way of returning if not properly healed. The final piece will be written by Dr. Carolyn Dunn and Tomantha Sylvester.

In partnership with: Women of Color Leadership Network