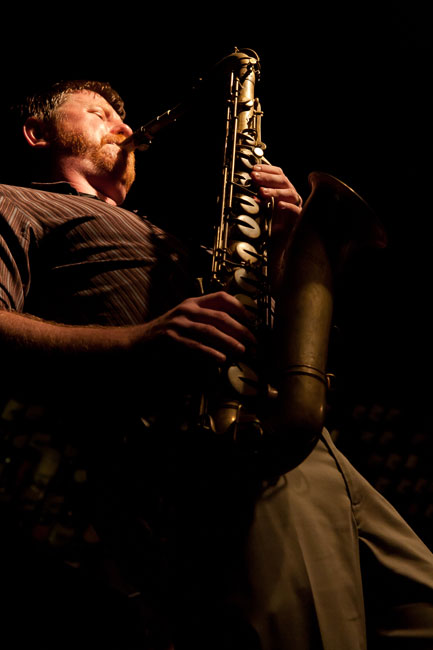 The music of American saxophonist and scholar Jason Robinson thrives in the fertile overlaps between improvisation and composition, acoustic music and electronics, tradition and experimentalism. Initially a devotee of post-1960s jazz and creative music, Robinson's music is a modern amalgam of cutting-edge trends in jazz practice and electroacoustic music.

Jason Robinson began performing concerts of unaccompanied saxophone improvisations in the late 1990s. Over the next 10 years, he developed a repertoire of solo saxophone music through extensive touring, detailed study, and a search for new improvisational vocabularies. This work culminated in the release of his album Cerberus Rising (Circumvention Music, 2009), a stark, moody, and deeply conceptual, recording that is the first in a trilogy of solo releases. At times reverently melodic, at other times brusquely discordant, Robinson's solo repertoire is in dialogue with the solo work of many greats: Roscoe Mitchell, Anthony Braxton, Evan Parker, John Butcher, and Gianni Gebbia.  Drawing on the extended expressive potential of the instrument--multiphonics, growls, hisses, squeaks, and flutter sounds are all par for the course. Robinson's performance at the Augusta Savage Gallery will include songs from Cerberus Rising, including a stretched rendition of John Coltrane's classic "After the Rain."

As a scholar, Robinson's work unpacks the relationship between improvised and popular musics, experimentalism, and cultural identity. He is an Assistant Professor of Music at Amherst College and holds a Ph.D. in Music from the University of California, San Diego.