Shahid Al-Bilali: A Mirror For My Children 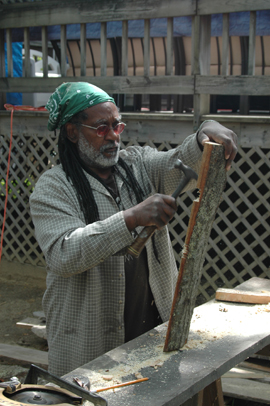 This ambitious project consists of a series of doors and panels that are carved and painted sculptures. In Shahid Al-Bilali's words: I am an artist whose intentions are to interpret the aspirations of my people, to get at the heart of our spiritual and material power, to the roots that enrich and strengthen the African in America. Born in Louisville, Kentucky in 1943, as a child in the segregated South, Shahid Al-Bilali experienced life in the all Black rural community of Newburg. As a politically and socially conscious person, he became involved in the Black Nationalist movement, first as an organizer for the Black Unity League of Kentucky, then as a member of the Black Panther Party and finally as a member of the Nation of Islam. His first mentor was an extraordinary art teacher, Mrs. Anna Huddleston. Under her tutelage, Al-Bilali won statewide arts competitions and with her financial support he attended classes at the University of Louisville. He took classes in painting, printmaking, illustration and jewelry making. After dropping out of school, he married at nineteen and began raising a family. Over the next two decades Al-Bilali trained as a skilled tradesman, channeling his creativity into building renovation and new construction including interior and exterior design. After moving to Amherst in 1997 to get a degree in African American Art and History from UMASS, Al-Bilali met renowned sculptor, Professor Dorrance Hill who introduced him to metal sculpture. Al-Bilali began expanding upon a concept placed in his mind by Hill, which was the notion of Fourth Dimensional Art. Hill had said to Al-Bilali, "You are breaking new ground in art by going beyond a three dimensional view of light and luminosity. You are a Fourth Dimensional artist". This was a concept Hill told Al-Bilali he would have to define for himself. These words offered him a new direction. The Fourth Dimension is the connection, the bridge of the physical world into the spiritual world, a new culture created by the African American experience. As he says: The African American is like the crow in the Native American mythology and just like the crow can move between the worlds we can be in two places at the same time. This particular type of aesthetic and ideological movement is what Al-Bilali has come to understand as the art of survival, the art of development and the coming together of the worlds" cultures. He explains: "African American art is the Fourth Dimensional experience. The Fourth Dimensional grid falls outside of what we call the natural world - it is the space, the bridge between the physical and spiritual worlds. Because of our position in the slave system, Africans in America experienced the space between many cultures and classes and endured the physical and spiritual effects of slavery. African American art, Fourth Dimensional art is the cutting edge in American and world art development. We find in African art all the definitions of the isms in European art. Many critics define African Art as primitive. In my opinion all art is primitive compared to the creation of the heavens and the earth. African American art is the evolution of African art, European art, American art and World art. African American art is neither African nor European; it is a new school of thought. African American creativity has touched our whole world. None of the many cultures of the planet Earth has escaped the influence of the creativity of the African American experience.