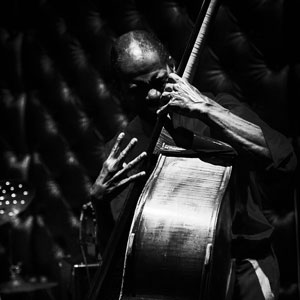 Legendary Bassist Avery Sharpe will perform a solo concert, incorporating double bass, electric bass and voice, into a unique musical autobiographical piece. The performance will include a video/slide show. At the performer’s request, upon arrival at the Avery Sharpe performance, all attendees must wear a face mask as well as provide their vaccination record, demonstrating full vaccination from COVID-19; or a PCR COVID-19 test with a negative test result, and a collection date and time stamp within 72 hours of the event. Please note that antigen COVID-19 testing results will not be accepted. Bio Bassist Avery Sharpe was born in Valdosta, Georgia and his first instrument was the piano. “I started playing when I was eight years old,” he recalls. “My mother is a piano player/choir director in the Church of God in Christ, and she gave lessons to everybody in the family—I’m the sixth of eight children—but it didn’t stick until it got to me.” He moved on to accordion and then switched to electric bass in high school, after his family had relocated to Springfield, MA.

Sharpe’s credits also include sideman stints  and recordings with jazz greats like Dizzy Gillespie, Wynton Marsales, Yusef Lateef, Bobby McFerrin, Pat Metheny Billy Taylor. and many more His first recording as a leader was the 1988 album Unspoken Words on Sunnyside Records. In 1994 he started his own artist record label, JKNM Records. To date he has more than 12 titles as a leader for JKNM Records.

Sharpe is equally adept at songs and longer compositional forms. In 1989, he wrote and conducted the soundtrack for the movie An Unremarkable Life.  A decade later, his six-movement piece America’s Promise debuted with the Springfield Symphony Orchestra. In the 1990’s Sharpe received a commission by the classical group Fideleo to write three extended works. In 2004,  he wrote a musical portrait for the stage for Chamber Music Plus. The stage production Raisin’ Cane, has been touring since 2007 and features the actress Jasmine Guy (featured actress from TV, “A Different World”)  and Sharpe’s Trio. In 2006, he was commissioned by the Springfield Symphony to write a Concerto for Jazz Trio and Orchestra which premiered in the 2007, featuring the Trio with (former “Tonight Show” Musical Director)Kevin Eubanks on acoustic guitar. Avery  continued his historical connection with releases of CDs, honoring Jesse Owens “Running Man”, Sojourner Truth-“Ain’t I A Woman”, Sister Rosetta Tharpe-“Sharpe Meets Tharpe”.

Sharpe’s album “400” is  his latest work. This project marked the 400th year since Africans were brought to the U.S.A shores in 1619. The recording was released in May 2019 on JKNM Records and featured- Don Braden, Duane Eubanks, Ronnie Burrage, Zaccai Curtis, Davis Whitfield, The Extended Family Choir and special guest Kevin Eubanks.

Avery Sharpe was the Sterling Brown ‘22 Distinguished Visiting Artist in Residence in Music at Williams College, as well as Artist Associate in Jazz Bass and Jazz Coach at Williams College.  He was also Faculty Advisor for the Williams Gospel Choir and affiliated faculty for Africana Studies.

In partnership with Jazz in July