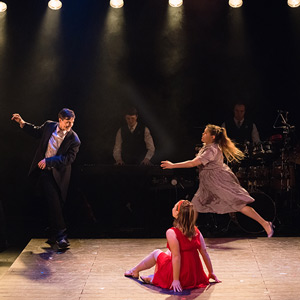 Theatre Re presents: The Nature of Forgetting

"The Nature of Forgetting" offers a glimpse into the challenges of an individual suffering from early-onset dementia. The work tells the story of Tom as his family celebrates his 55th birthday. Yet the textures of his clothes and voice of his daughter plunges Tom into a whirlwind of memories from his past. Theatre Re recreates a theatrical experience that pulls the audience into Tom's struggles to recognize the present. A confluence of frenetic action, live musicians, and evocative moments brings us into close contact with the heartbreaking struggle of Tom and his family to live with a disease that affects a quarter-million Americans today. $35, $25; Five College Students and Youth 17 and Under: $10 The Nature of Forgetting caps off UMass Week of Memory and Forgetting, a week-long series of events in collaboration with The Initiative on Neurosciences, the Fine Art Center, the Institute for Holocaust, Genocide, and Memory Studies and faculty in the Department of Spanish and Portuguese Studies. Memory Week events are free and open to the public with the exception of The Nature of Forgetting. There will also be a post-performance talk with the company and UMass neuroscience faculty.

About The Nature of Forgetting: Part of British Council Edinburgh Showcase 2017 and following a sell-out run at the 2017 London International Mime Festival, Theatre Re presents a powerful, explosive and joyous piece about what is left when memory is gone. Tom is 55, today. As he dresses for his party, tangled threads of disappearing memories spark him into life, unravelling as a tale of friendship, love and guilt. Funded by Arts Council England. Co-commissioned by the London International Mime Festival, The Point Eastleigh, and South Hill Park Arts Centre Supported by Shoreditch Town Hall, Jacksons Lane, Lincoln Drill Hall and Haringey Council About Theatre Re: Established in 2009, Theatre Re is a London-based international ensemble creating thought-provoking and moving work. Its shows examine fragile human conditions in a compelling, physical style embracing mime, theatre and live music, and are often described as magical, poetic and tender as well as disturbing and haunting. The name of the company comes from the prefix ‘re’. It is the ‘re’ of re-discovering and re-imagining, breathing new life into what already exists. Intimate collaborations with experts in different fields – such as science and public health - and various community groups throughout the devising process play a crucial part in the development of the work. Our productions have toured widely in the UK but also in France, Ireland, Switzerland and Germany. Theatre Re is an Associate Company at The Point, Eastleigh and South Hill Park Arts Centre. Productions include: The Nature of Forgetting (2017), Blind Man’s Song (2015-2016), The Little Soldiers (2013-2014), The Gambler (2011-2013), Your Letter, At Last! (2009-2011) and gLoved (2009-2010). Theatre Re's Website Theatre Re's Facebook Theatre Re's Twitter

Academic Connections: Anthropology; Communication; Health Promotion & Policy; Nursing; Philosophy; Psychological & Brain Sciences; Social Thought & Political Economy; See all the Course Connections Questions: · What stimuli spur memories in both healthy individuals and those suffering from Alzheimer? · How do non-verbal interactions generate memories and meaning for us? · How does the brain process and reconstruct memories? · How can families best care for aging and/or ill patients? · What is the impact of dementia on family and caregivers? · How do theater, movement, and music interconnect to represent memories? See all the Course Connections