A composer, performer, poet, educator, and arts administrator, Dr. Frederick C. Tillis was one of the major influences on the cultural life at UMass Amherst for over forty years.

It was Dr. Tillis that brought the Fine Arts Center to life as an organization, helping to jump start some of the most successful arts initiatives the university has seen, including the Afro American Music and Jazz program (through the Music Dept.), the New World Theater, Augusta Savage Gallery, Asian Arts and Culture Program, Jazz in July Summer Music Program, the Black Musicians Conference and of course, the popular Bright Moments Summer Concert Series.

He served as Director of the Fine Arts Center for twenty years building the arts organization into the Pioneer Valley’s largest and most comprehensive venue for the arts. By the time Tillis retired in 1997, he held the positions of Associate Vice Chancellor for Equal Opportunity and Diversity, professor emeritus in the Department of Music and Dance and director emeritus of the Fine Arts Center.

Dr. Tillis will always be held in high regard not only for his love of the arts but for his love of humanity. He was an icon. He touched countless number of lives, nationally as well as internationally—students, colleagues, musicians, artists, patrons. We quickly all became his friends, his family. He would give a reassuring smile, a simple hug, a few words of inspiration. His love for us was real and felt with each interaction.

His passing is a huge loss, but his legacy will continue to encourage and inspire us for many generations.  Thank you, Dr. Tillis!  Read more at umass.edu Read more from the UMass Department of Music & Dance Read feature in the New York Times by Julia Carmel, June 17, 2020

by Dr. Frederick C. Tillis, from “Breaking Dawn and Healing”

Like a cherry tree living on earth     my fruits come in colors of the rainbow         with roots nurtured in the fertile soil     among hill, mountains, and meadows.         Scorched land of cinders and ash     do not sustain bitter flames of wrath.   Time chokes the breath of bruising rash  and allows the promise of a fragrant path.        We are all beings of soul and flesh. Neither species or gender, should surrender         leaves, trees, and others as well      live by chance, dreams, and myths. Sacred and secular collide in heaven & hell.      But bones and stones of ghost last while fashions and families eventually pass.      There is no greater love or treasure        than the gift of peace and measure            of all life and what it is worth as it grows, dies, and again is given birth. 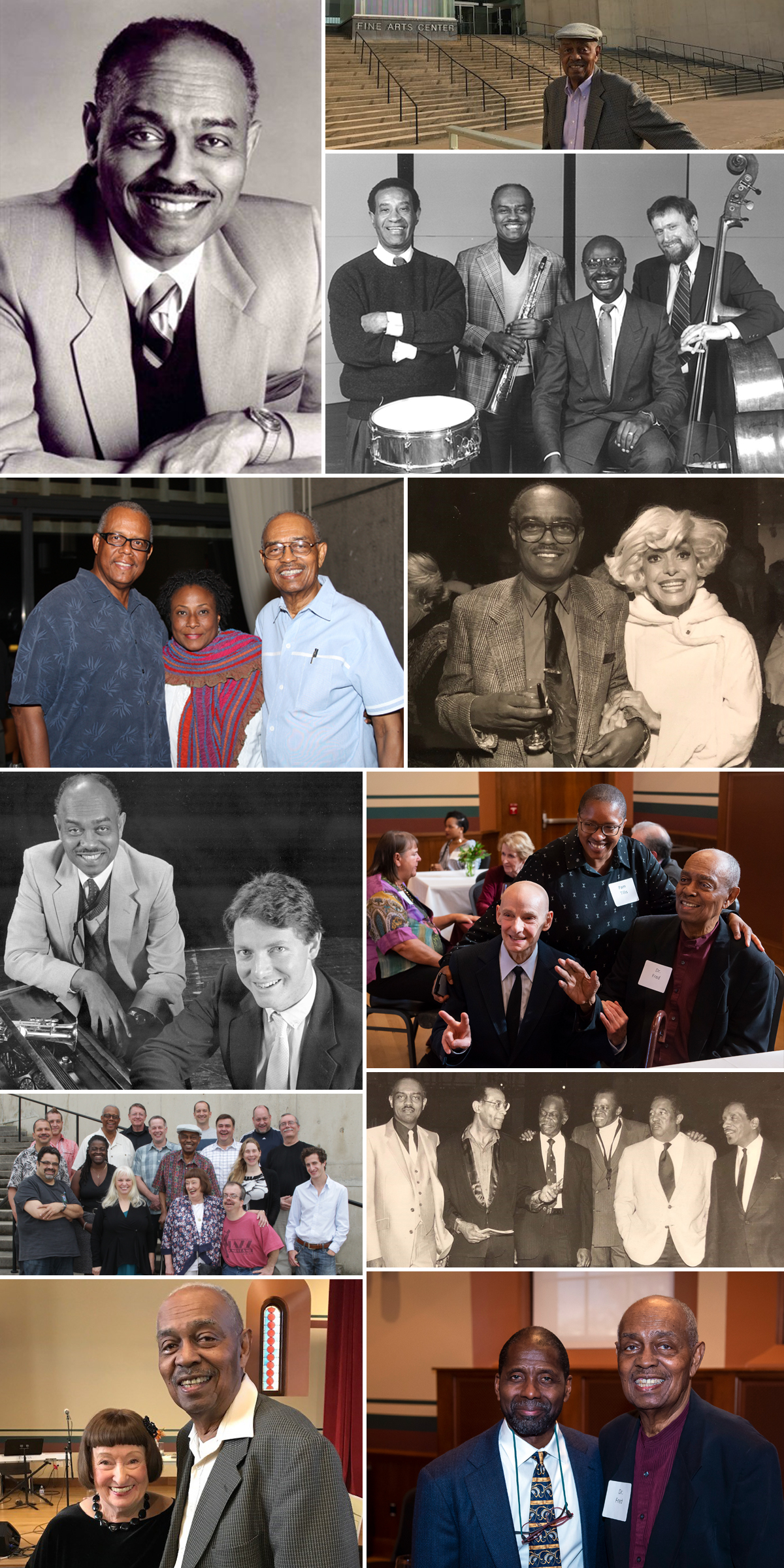 This digital slide show celebrating the life and work of Dr. Tillis was created by Ed Cohen Photography.

Dr. Fred Tillis leaves an extraordinary legacy at UMass Amherst. He was a gentle soul who made me feel at once like we had known each other a long time. Fred was proud of the program he built at the Fine Arts Center and was devoted to its long-term viability—a strong advocate for the performing arts and the preservation of cultural heritage. From UMass Amherst Chancellor Kumble Subbaswamy

I did not have the opportunity to know Dr. Tillis well, but I've felt his indelible imprint in every facet of our work. From our very first meeting last summer to our many brief encounters at performances throughout the year, it was clear to me that the FAC was not just a place he worked, but was in fact a piece of him. From Current FAC Director Jamilla Deria

He has meant so much to me since 1964 when I had the privilege of having him as my music theory and orchestra teacher at Grambling State University for two years. Dr. Tillis was a giant in the music and arts education arenas and a visionary arts administrator. He will be sorely missed for his unselfish contributions to our organization, by the FAC staff, advisory board, friends and UMass community at large. From Dr. Willie Hill, former director of the Fine Arts Center and Tillis’ successor

The Department of Music and Dance mourns the loss of our friend and colleague Dr. Frederick Tillis – a gifted composer and performer, talented poet and a formidable administrator. I first met Fred in 1978, and have many wonderful memories of touring Russia with him, playing local jazz clubs, and presenting concerts of new music in a variety of venues. He was then, as he remained for the rest of his life, a kind, caring and knowledgeable human being. He will be sorely missed. From Salvatore Macchia, Department of Music and Dance Chair

I loved Fred Tillis. The breadth of his knowledge and the height of his achievement are indeed remarkable; but what I also learned from him over the years was that I was blessed to be in his presence and that neither knowledge nor achievement is worth much if not placed in the service of humanity. We are saying goodbye to this giant of a man at a time when his influence is most needed in our country and in the world. But we will always have his example. From Esther Terry, Emeritus Faculty and Chair of Afro-American Studies

I succeeded Fred as Chair of the Department of Music at Kentucky State University. As a novice administrator, I needed a lot of advice and insight into the work of a Department of Music Chair. Fred was patient with me and shared his immense knowledge on administering a Music Department. He had begun working toward full accreditation for the Department in the National Association of Schools of Music, Using the foundation that he had laid, I was able to lead the Department to Accreditation. Fred was gentle, very bright, personable, and an excellent musician, He made outstanding contributions to academic music composition, jazz, performance, and teaching. He shall be deeply missed.  From Warren C. Swindell