Watching With My Ears 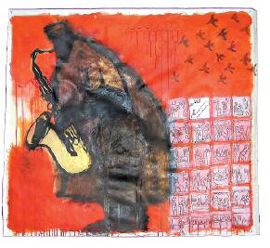 Jorgo Schäfer is a painter and cartoonist - and he loves free jazz. For the past five years, he has traveled to New York City. While there, he attends the cutting-edge Vision Festival, where he sits at a table within the audience and paints improvising musicians who perform throughout the week. This exhibit at the gallery features some of these recent watercolors.

In addition to his commitment to improvised music, Schäfer also works with a deep understanding of an ancient notion of the inner coherence of all forms of art. For Jorgo Schäfer, listening and watching function interactively.

In the following excerpt from I Listen, Therefore I Paint: Notes on the Jazz-Pictures of Jorgo Schäfer Dr. Hermann Ühlein comments critically and eloquently on Schafer's process and some of the painting that will be featured in this exhibit.

It would be too easy to interpret the jazz-paintings of Jorgo Schäfer in a one-on-one fashion and to then mold them into statements. This is not about a visualization of what was heard or even a translation of jazz sounds into colors. An example may clarify the emergence of Mr. Schäfer's jazz paintings: the great Basque sculptor Eduardo Chillida is not only known for having been an admirer of Johann Sebastian Bach's music but also for having thoroughly studied its structure of composition. It goes without saying that there is no such thing as a clear correspondence or even a causal relationship here. But one can discover a similarity regarding clarity and airiness. Maybe Mr. Chillida's huge and heavy sculptures draw their inspiration from the same mathematical source as a simple however ingeniously composed fugue of Bach.

Perhaps it is just such a relationship that Jorgo Schäfer experiences with musicians of the free-jazz scene. Maybe Jorgo Schäfer paints in the same way as Jemeel Moondoc or Fred Anderson play their saxophones: a manner of improvisation that is created in equal parts by exercising control and by a form of surrendering to the self. Colors and sound are flowing, figures emerge and are outlined, then they may be dropped, blurred or painted over. A tone evaporates and reappears seemingly from nothingness and together with other tones it may build chords or harmonies before they all scatter again.

"Line management" and the unfolding of "motifs" or "themes" are wordings that belong to jazz as well as to painting. Presumably the sounds of free jazz are closest to the immediate utterings of the human voice. Free jazzers don't "make" music. They surrender themselves to their instruments in the same way Jorgo Schäfer surrenders to his painting tools when he submerges into the energy of a jazz audience during a concert: visual and acoustic impressions, feelings, thoughts and dreams flow into a stream of associations.

This stream sometimes lingers for a while between rapids, then gathers itself and starts to move again. Thus Jorgo Schäfer's painting doesn't stop the stream but it is the flow's manifestation, a transformation of musical energy into via movements of a brush or a bamboo quill. It is a back and forth between straight-on-painting and back-pedalling, between a spontaneous painterly gesture and a reconsidered composition.

His works created during concerts draw their appeal from their temporary and sketchy character as it is contained in the scenes painted in 2004 on Chinese paper rolls. Later in the studio these "live-sketches" can serve as a base for more elaborate paintings to which the artist's recollections, photographed motifs, styles of execution and basic themes might be added. Over time spontaneously conceived sketches grow into deeply structured paintings. Jorgo Schäfer does not hurry the development of these images and, see there, after a pause a new contour, a different coloring or another layer might emerge.

Jorgo Schäfer's work method and his materials yield pictures that are illusive. Apart from the base nothing borders the images. They do not have frames and thus in some measure they overflow. The internal contours of the paintings are fragile and concreteness is only indicated. Ink lines and color areas as well as ink-applied two-dimensional image spaces superimpose and overlap, however they remain transparent. Sometimes contours of musicians appear only at second view before disappearing into the anchorless background. Transitions between colors and ink-induced toning create a permeable and unfathomable intensity: at times a heavy, deep blue or orange iridescent into brown might be dominant. Then it gives way to an anthracite turning into purple next to and in the midst of other colors like dark green or light pink. Almost every time the status remains up in the air, ambivalent like light at dawn or the magic of the "blue hour" before dusk. Several layers create images within the paintings. Contours and color fields which have been painted over can resurface and encourage the artist to further shape some details. They might also cause the viewer's perception to steadily move between concretion, new imagination, and the dissolution of visual impressions.

Almost all of the depicted musicians have closed eyes or are wearing dark glasses as if this was not about seeing but about hearing and a total focus on that one sense. Thus the paintings are not portraits of the musicians but the discernible figures are part of the picture. Even if the names of the musicians are part of the painting's title it is not about a depiction of individuals but a depiction of what they are doing: they create rhythm and tone, different worlds than those of the visual and the tangible. They seem to be deeply immersed in worlds of sound which break free over and over through the musicians. Jorgo Schäfer paints these worlds of sound. He can do so because he sees them while listening. "Watching with my ears" is therefore the title of the series of exhibitions of his jazz-paintings.

In prototype style his painting "fred anderson trio" shows the musicians submerged in another world. Slowly, bit by bit, one can recognize the double bass player, woven into a dark color field. In "free jazz 3/02" the musicians are drawn in a cartoonish back-drop of completely free-floating associations: flat irons, masks, fantastic animals, snakes, mythological signs, the sun. Completely different is "mekong misery" with a band drawn by brush and ink and included in a composition of blood red and ash grey. A recent painting, 'sleeping buddha," bundles three forms of contemplation: sleep, music and meditation. A saxophone player is depicted in a laying position. He sleeps in a warm orange but holds his instrument as if playing. Above him, in a blue night, flocks of birds, flying fishes and fantastic animals float by. Our everyday reality is suspended. And so the musicians seem to be exempt from the laws of time and space in their contemplation., In "jemeel moondoc" (2001) the musician stood on a small ladder that carries him into the night's sky high enough to be held and embraced by the crescent moon.

At first glance music is a simple succession of tones, one-after-the-other and thus already evaporating during the hearing process. Viewed from this perspective music can be considered the epitome of moment and transience. Therefore music's essence is related to dance and death. "dance of jazz / dance of death", the title of a diptych as well as other images such as "white guys cannot swing," and "requiem" pick out death as a theme, often in the motif of the danse macabre. The diptych, however, shows an affection for both "players". On the left the blindfolded skeleton with the drums leans over to the trombone player on the right . The trombonist answers this movement for a kiss. When death can be considered an all-embracing "liberation" and as a suspension of the experience of time, death finds equally powerful antagonists (or team-mates) in timeless dance and ecstatic (jazz-)music. Death might well be drumming. Whoever allows death to come close enough to dance with him is truly a master of the art of living, no matter in what field. "All right, give the kids another song"