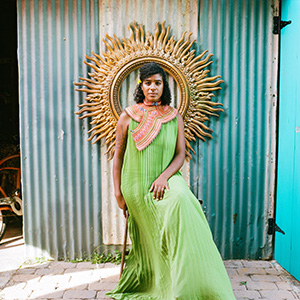 Leyla McCalla is a Haitian-American artist, founding member of Our Native Daughters and alumna of the GRAMMY award-winning Carolina Chocolate Drops. She sings in French, Haitian Creole, and English, and plays cello, tenor banjo, and guitar. Influenced by traditional Creole, Cajun, and Haitian music, as well as by American jazz and folk, her music is earthy, elegant, soulful, and witty. 2019 saw the release of her third solo album, “The Capitalist Blues” as well as the widely-acclaimed collaborative project, “Songs of Our Native Daughters” (with Rhiannon Giddens, Amythyst Kiah, and Allison Russell). Her performance was followed by a post-show dialogue moderated by Eugene Uman, director of the Vermont Jazz Center.  Click here to watch and comment on Facebook or watch below via YouTube.