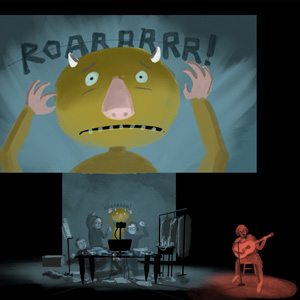 Leonardo & Sam: the Terrible Monster and the Most Scaredy-Cat Kid in the Whole World, Respectively

Leonardo is a terrible monster. He tries so hard to be scary, but he just...isn’t. Then Leonardo finds Sam, the most scaredy-cat kid in the world. Will Leonardo finally get his chance to scare the tuna salad out of an unsuspecting human? Or will it be the start of an unlikely friendship? Inspired by the beloved children’s books by Mo Willems, and realized through mind-bending projection, DIY cinema, music, and immersive sound by critically-acclaimed multimedia artists Manual Cinema, Leonardo & Sam tells the story of a monster who longs to be scary and the big decisions about identity and empathy that we all must make. Performance to be followed by Q&A

$12 per household or device OR Bundle all Performing Arts events, free and ticketed, for $70, for a limited time only Free for UMass students