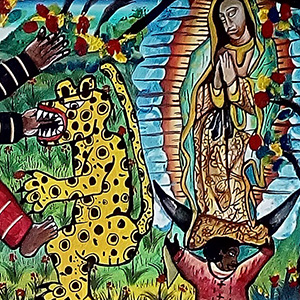 In this extraordinary exhibition, Baltazar Castellano Melo places his gaze on Mexico’s Black population. Born in Cuajinicuilapa, a region of Guerrera, Mexico, and the son of a Black mother and mestizo (mixed-race) Mexican father, his work is a fervent example of what is possible when artmaking meets research. Through his playful, yet provocative series of prints, Melo introduces us to a world of votives, or religious offerings. The artist, through questions and observations, designed a research project consisting of one-on-one interviews, in order to investigate the world of Mysteries as experienced by his participants. They open up to him, telling stories of their ancestors, and sharing their memories of divine interventions in the lives of those elders. The inspiration for this body of work came after Melo visited a small church near his home town of Cuajinicuilapa, where he saw a piece of painted wood that was a thanks offering to tata chu, saint of the Coast. The people there were looking for miracles. There were clothes and shoes at the site, and even his mother was leaving part of the harvest from that year so that the next year might be better. Inspired by her devotion and faith, he had soon discovered an artistic response to what he had seen. And, this new work would express the myths and legends of life of the black and mestizo people within his small coastal town. Ex-Votos, completed in 2017, was two years in the making. It consists of a series of boxes, each containing seven lithographs within them. Each of these boxes becomes an ex-voto, an offering, much like the illustrated stories depicted within them. Through his work, Melo magnifies the news of the good received by those seeking miracles. Prostitutes, musicians, seamstresses and peasants tell their stories. In Baltazar Castellano Melo’s words, “I am of humble origin. I am an artist and a peasant. I am an artist and a sorcerer. I am an artist and a chronicler of the faith of my people.” Baltazar Castellano Melo is a graduate of the School of Fine Arts in Oaxaca, Mexico. He has exhibited extensively throughout Mexico and in 2017 was featured in a printmaking exhibition in Cincinnati, Ohio.