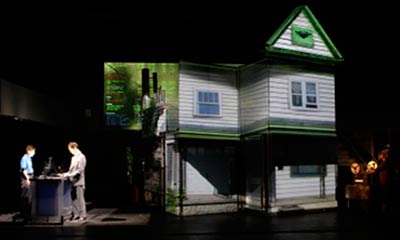 The Builders Association HOUSE / DIVIDED offer an incisive and insightful examination of the current mortgage crisis juxtaposed with passages from John Steinbeck’s classic Depression-era novel The Grapes of Wrath. Throughout HOUSE / DIVIDED, the Builders employ their trademark digital media and video wizardry, integrated into and supplementing the live action onstage. This assemblage of images and scenes illuminates foreclosure’s impact on American character and our collective sense of identity. The show will also point toward local efforts to rebuild and transform our own communities. Prior to that production there will be opportunities to talk about our own fears, experiences and what the future looks like. 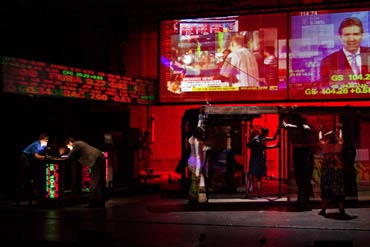 – John Steinbeck, The Grapes of Wrath

Using John Steinbeck's classic novel The Grapes of Wrath as a narrative backbone, HOUSE / DIVIDED (formerly ROAD TRIP) tells contemporary tales of foreclosure, following economic refugees and migrants from two different American eras. Steinbeck's Joad family moves along the great Dust Bowl migration, while a contemporary house rooted to its site yet connected to a web of global finance and investment becomes a container for stories from the current, evolving crisis. HOUSE / DIVIDED explores the changing meaning of home, homelessness, and place both in the present moment and in the broader context of the American mythos.

On stage, HOUSE / DIVIDED is built around an archetypal house that is sometimes inhabited, sometimes abandoned, sometimes transformed or broken, and sometimes only imagined or remembered by those who have moved on or lost their homes. In HOUSE / DIVIDED this house is more than an image or representation; it is an artifact of the current upheaval the real thing: a foreclosed house from Columbus, Ohio dismantled and carried in pieces to the stage to tell its story (an outgrowth of the Builders' series of creative residencies at Wexner Center for the Arts and the Ohio State University). The house is a tragic character, inhabited and manipulated by the people and institutions that have surrounded it from an owner and renter to a local realtor all the way to the trading desk at Goldman Sachs and the Swiss headquarters of reinsurance giant AIG.

Outside the house, on the road, the Joads carry on their eternal journey. Steinbeck's beautiful prose, both stark and lyrical, is used in voiceover as a descriptive soundtrack as we step in and out of their story, illustrating their trials and struggles as they make their way slowly west. They build their world onstage, dreaming of ”home,” while the production ghosts forward to our complex and contemporary digital environment.

As with all of the work of The Builders Association, HOUSE / DIVIDED draws from “real life” events as source material; the myriad, bizarre, humorous and lamentable stories of the current crisis. HOUSE / DIVIDED traces a line from kerosene lamps and makeshift roadside tents to the digital glow of screens under overpasses and in parked cars at Wal-Mart parking lots. HOUSE / DIVIDED finds us at our current crossroads: with a radically altering sense of home and stability, community and ownership and a retooling of the American Dream.

The Grapes of Wrath ©1939 by John Steinbeck. Copyright renewed, John Steinbeck 1967 Post-performance Talk-Back: Join the cast of the House/Divided immediately following the performance. Plus other educational events. FAC-i-ped-i-a: Performance running time is approximately 75 minutes with no intermission.

Post performance Talk Back: Join the cast of the House/Divided Association immediately following the performances.

Wednesday, October 10, 6:30 p.m. – 7:30 p.m., FAC Lobby, Free, Reservations requested, call 413-545-0190 Join us for a casual dialogue and reception including UMass Economics Department Senior Lecturer John Stifler and The Builders Association Artistic Director Marianne Weems for a discussion of the impact of the housing and mortgage crisis and the artistic development of House/Divided.