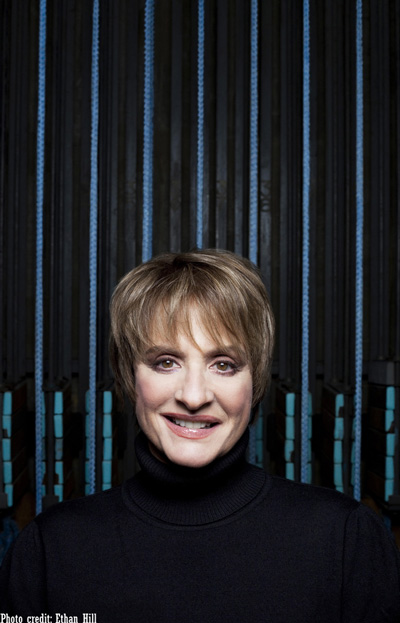 The Gypsy in My Soul

Two-time Tony Award winner Patti LuPone brings her new one-woman show, The Gypsy in My Soul to the Fine Arts center Concert Hall. Known for her Tony Award-winning performances in Evita and Gypsy, her Olivier Award-winning performance in Les Misérables, and turns in Sweeney Todd, Sunset Boulevard and so many other critically acclaimed roles, Patti LuPone is a true theatrical force of nature. With her powerhouse vocals, impeccable timing, and skilled acting, Ms. LuPone captures the essence of each song and makes it uniquely her own. An extraordinary talent, an extraordinary concert - Patti LuPone is not to be missed!

Author of the NY Times best-selling autobiography, Patti LuPone: A Memoir, most recently starred on Broadway in the musical Women on the Verge of a Nervous Breakdown. Miss LuPone swept the 2008 theatre awards winning the Tony, Drama Desk and Outer Critics Circle Awards for Best Actress in a Musical and the Drama League Award for Distinguished Performance for her performance as Rose in the critically-acclaimed Broadway production of the classic Jule Styne-Stephen Sondheim-Arthur Laurents musical Gypsy, directed by the show’s author, Mr. Laurents.

Recent stage credits include her debut with the Los Angeles Opera in Weill-Brecht’s Mahagonny (the cd recording of that production recently won two Grammy Awards for Best Classical Recording and Best Opera Recording), the world premiere of Jake Heggie’s new opera To Hell and Back with San Francisco’s Philharmonia Baroque Orchestra, Mrs. Lovett in John Doyle’s award winning Broadway production of Stephen Sondheim’s Sweeney Todd (Tony, Drama Desk, Outer Critics Circle Award nominations – Best Actress in a Musical; Drama League Award for Outstanding Contribution to Musical Theatre), the title role in Marc Blitzstein’s Regina, a musical version of Lillian Hellman’s The Little Foxes at Washington D.C.’s Kennedy Center, a critically acclaimed performance as Fosca in a concert version of Stephen Sondheim’s Passion, which was also broadcast on PBS’ Live From Lincoln Center, and a multi-city tour of her theatrical concert Matters of the Heart. She has also performed Matters of the Heart internationally, including runs at Australia’s Sydney Festival and London’s Donmar Warehouse Theatre. Her CD recording, based on this concert, was named one of 1999’s best recordings by both The Times of London and Time Out/New York.

In addition to Matters of the Heart, Miss LuPone also performs two other solo concerts Coulda, Woulda, Shoulda and The Lady With The Torch. She made a triumphant solo concert debut at New York’s Carnegie Hall in Coulda, Woulda, Shoulda resulting in a sold-out encore performance, and performs the concert with major symphony orchestras around the country. The Lady With The Torch is the basis for Miss LuPone’s solo CD on Ghostlight Records. She also tours in a new concert with her Evita co-star Mandy Patinkin – An Evening With Patti LuPone and Mandy Patinkin. Her most recent cd is Patti LuPone at Les Mouches, a digitally remastered recording from soundboard tapes of her now-legendary 1980 nightclub act which she performed during her Broadway run in Evita.

Patti LuPone’s other recent New York stage appearances include performances as La Mome Pistache in the Encores! production of Cole Porter’s musical Can-Can at New York’s City Center, as The Old Lady in the New York Philharmonic’s concert production of Leonard Bernstein’s Candide, and performances on Broadway in the hit revival of Michael Frayn’s Noises Off, in David Mamet’s The Old Neighborhood, Terrence McNally's Tony Award-winning play Master Class and in her own concert Patti LuPone On Broadway, for which she won an Outer Critics Circle Award. Over six consecutive summers, she’s appeared in the Ravinia Festival’s Sondheim series, starring as Mrs Lovett in Sweeney Todd, as Desiree in A Little Night Music, Fosca in Passion, Cora Hoover Hooper in Anyone Can Whistle, Rose in Gypsy and was featured in two different roles in Sunday in the Park with George.

After completing her training with the first class of the Drama Division of New York’s Juilliard School, she began her career as a founding member of John Houseman's The Acting Company playing a variety of leading roles, both on and off-Broadway and on tour throughout the United States. Her subsequent New York dramatic credits include Dario Fo's Accidental Death of An Anarchist; David Mamet's The Water Engine, Edmond, and The Woods and Israel Horovitz' Stage Directions. Miss LuPone's memorable performances on the New York musical stage include Vera Simpson in the Encores! production of Pal Joey, Reno Sweeney in Anything Goes, (1988 Drama Desk Award, Tony nomination, Best Actress in a Musical), The Cradle Will Rock, Nancy in Oliver!, Evita (1980 Tony and Drama Desk Awards- Best Actress in a Musical), Working and Rosamund in The Robber Bridegroom (1976 Tony and Drama Desk Award nominations, Best Featured Actress in a Musical).